The evolution of our driving experience with autonomous cars will bring about a safer experience for everyone sharing the road. Very soon this technology will be integrated into all of our daily lives just like a smartphone has become. Avoidable accidents resulting from errors in human judgement such as drunk, reckless, and distracted driving can be eliminated from part of the traffic risk we have been forced to accept as a harsh reality in everyday driving.

The beginning of the mass production of these new vehicles, follow a study that examined what the impact of autonomous cars will have on the occurrences of fatal accidents for drivers. The results of the study indicate that when human emotions and decision-making mistakes are removed from the equation, death rates on the road can be reduced by 90%. This means nearly 300,000 lives can be saved every decade just in the United States alone, while saving over $190 billion in costs every year from injuries related to these preventable accidents. 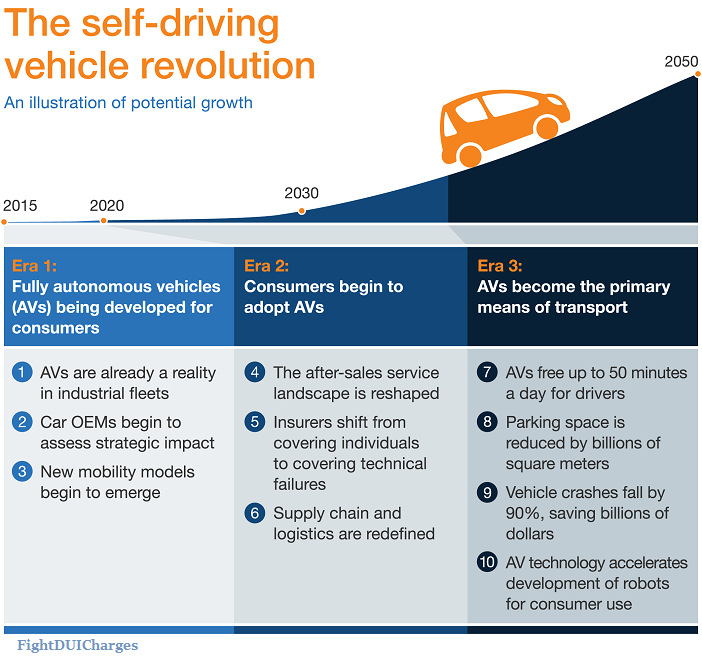 Musk said through Twitter on July 3, 2017 that Tesla was approximately two weeks ahead of their original schedule for their newly available vehicle. Musk went on to tweet that his tech company expects to build 100 cars this August, and more than 1,500 in September of this year. “Looks like we can reach 20,000 Model 3 cars per month in December,” he also detailed.

The new lower-cost Tesla vehicle is to begin at an estimated price of $35,000 and with the included $7,500 federal electric car tax credit available, the vehicle could cost even less at around $27,500. The company details this 5-seat vehicle will be able to go 215 miles (133 kilometers) on just one charge. Tesla goes on to say this particular car will not only be cost efficient, but it will also be sporty, in that it can accelerate from zero to 60 MPH in less than six seconds when timed during road testing. Tesla’s other new car models cost for more than twice as much as the base price of this latest Model 3, and retail for more than $125,000.

Tesla will begin to ship out their new Model 3 vehicle to the company’s first 30 buyers on July 28, which just meets the stated July delivery date assured by Musk. However in manufacturing a high-demand car such as this, the company must build the vehicle in quantity, since over 400,000 consumers have already paid the required $1,000 deposit fee to secure the purchase for this new car.

Previously, Musk had stated the production was on track to begin assembly by July, although the company has had many delays in getting their new cars to market on schedule. The Palo Alto, California-based Tesla is on track to to build approximately 5,000 Model 3 sedans a week by the end of 2017, and assemble another 10,000 vehicles per week starting in 2018.

Investor optimism and buyer anticipation surrounding Tesla’s Model 3 vehicles, have elevated the company’s stock prices to new record highs. The value of Tesla shares increased following Musk’s tweets on July 3rd but then went back down, finally closing down 2.5% to $352.62 a share. Despite this drop, Tesla stock price is up at more than 64% in 2017, elevating Tesla’s market value. It is currently valued at almost $60 billion, which is higher than some of the largest automotive companies and competitors in Detroit. By comparison, GM is currently valued at $54 billion, while Ford is worth approximately $46 billion.

Until this year, Tesla dominated the auto industry for fully-electric vehicles that can go 200 miles (322 kilometers) or more on a charge. However, this market has now changed. GM beat Tesla to the mass market with the Chevrolet Bolt, a $36,000 all-electric vehicle which travels 238 miles (about 383 kilometers) per charge. Audi plans to take on Tesla with an electric SUV with 300 miles (483 kilometers) of range next year; and the still unnamed Ford electric SUV will be in production by 2020. Volkswagen has plans in the works to build over 30 different electric vehicles by no later than 2025. On July 5, 2017, Volvo said it would launch five fully electric cars between 2019 and 2021.

Automotive competitors like Mercedes and Volvo — not to mention tech companies like Google and Uber — can also match Tesla’s efforts to develop self-driving vehicles. Google has already created the self-driving car project called Waymo, and they are a company with both a financial and technological edge on the competition for this market.

Soon there will be a clear winner in the race to build the fully autonomous car that is affordable for the masses, and succeeds at transforming the automotive market forever going forward into the future. However the ultimate victory will be for the everyday people sharing the world’s roadways, when preventable accidents such as those caused by DUI or texting and driving become a thing of the past. Consequently, this technology means significantly less people will find themselves having to explore ways how to get out of DUI charges when their car is driven by computer and not an impaired driver.

As most people are already fully aware of, DUI an DWI charges are a serious criminal offense in each state of ...

Roadside Swabs Test for Cocaine, Marijuana, and Other Drugs With the increased number of states legalizing marijuana use, experts have been ...

New Year’s Eve is an exciting time of year for many people, and while this should be a joyous and fun ...

What You Should Know About the Price of First-Time DUI in the Show-Me State Operating a vehicle with a Blood Alcohol ...