Mistakes You Should Avoid After Being Arrested for DUI 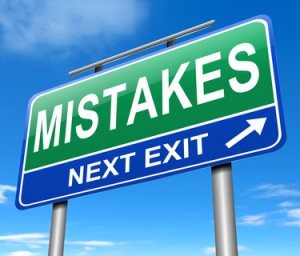 Being arrested for Driving Under the Influence or Driving While Intoxicated is a very serious matter. Depending on the severity of the charge and any prior convictions the individual has, the punishments for a recent DUI or DWI arrest could include large fines, enormous court costs, and jail time. After being arrested for DUI, there are certain things an individual should do and certain mistakes they should work hard to avoid. Here are the three biggest mistakes people make and how you can avoid them.

Some people may feel as though a DUI or DWI arrest is not a big deal. The truth is, if you end up being convicted of Driving Under the Influence, those charges will follow you for the remainder of your life. This does not just mean a criminal record – it also means having a blemish on your record whenever a potential employer runs a background check, not to mention the increased car insurance costs alone could mean paying thousands of extra dollars every year because of a DUI or DWI conviction.

Many people are also unaware of the actual consequences of a DUI conviction. Depending on which state you live in, even a first offense of DUI can carry heavy penalties. Some examples of first DUI offense punishments are:

For some, these may not seem like very heavy penalties for a first offense, but imagine the repercussions of not being able to get yourself to and from work or school for up to a year? Or missing work for 3 days because you are in jail? In some cases, a DUI or DWI arrest can lead to the individual losing their job for missing work due to these penalties or them falling behind and/or failing out of school since they are unable to get themselves to class or find a reliable source of transportation.

In some states, Driving Under the Influence and Driving While Intoxicated laws are very complicated. On the other hand, hiring a knowledgeable, reputable lawyer can sometimes be very expensive. Depending on the individual’s circumstances, they may qualify for free legal counsel for their DUI case. While public defenders serve a great purpose, they also see a number of different types of cases, making it impossible for them to be an expert in all situations or on all types of laws for the state.

Having legal counsel that is not well versed in the DUI or DWI laws for the state in which the case is taking place could mean the individual will not have the best chances of beating the charge or having the charge reduced. Whenever possible, the charged individual should seek legal counsel from an attorney who specializes in Driving Under the Influence and Driving While Intoxicated cases. There are a few reasons why this is such an important step in the DUI case process:

Individuals who opt for the public defender or cheaper legal counsel may not have all the benefits listed above. In many cases, a public defender will push for their client to take a plea bargain in order to avoid having the case go to trial – this is usually because they lack the knowledge to try the case properly and build a strong defense for the individual. Always do you best to pull resources to hire a DUI attorney and make sure to interview different lawyer to find the best fit to represent you during the trial.

In most Driving Under the Influence or Driving While Intoxicated cases, the individual’s license will be suspended 30 days after they are arrested. After being released from jail after the arrest, usually on bond, the individual will be free to live their daily life between their arrest and the start of trial without the ability to drive. One mistake that many people make is still driving even through their license has been revoked or suspended – this is usually the case when they are desperate to still go to work or school.

These punishments will then be tacked on to the individuals DUI or DWI conviction penalties, which could mean not having a license for a significantly longer period of time, spending more time in jail, or having to pay much higher fines than you can afford. It is also important to know that even harsher penalties than the ones listed above are passed down for those individuals who commit major traffic violation or are caught committing another DUI while on license suspension.

It is also important to remember that the penalties for driving with a suspended license do vary from one state to the next. Here are some examples of the varying penalties by state:

As outlined above, the penalties for driving with a suspended license range from simple fines to a substantial amount of jail time.

When this is combined with the possible penalties associated with the original Driving Under the Influence or Driving While Intoxicated charge, it would mean a long stay in jail or a lengthy license suspension which could impact the individual’s ability to continue to attend work and/or school, leading to a loss of income and/or failing out or being unable to attend school.

How a Lawyer Charged With DUI Got The Case Dropped

There are numerous technical defenses that can get a DUI case dropped. As recently in the news about a lawyer’s DUI ...

For a variety of reasons, there are times when a person will want to know how to look up DUI arrests ...

How Long Do I Have to Hire a Lawyer After a DUI, DWI Arrest for the Arraignment?

Dealing with a DUI, DWI Charge – How Soon You Will Need a Lawyer After being arrested for Driving Under the ...

Can a DUI Arrest Affect Another Separate Court Case that I Currently Have Going On?

What You Should Know About Facing DUI Charges during another Case Proceeding In some unfortunate cases, individuals are arrested for DUI ...